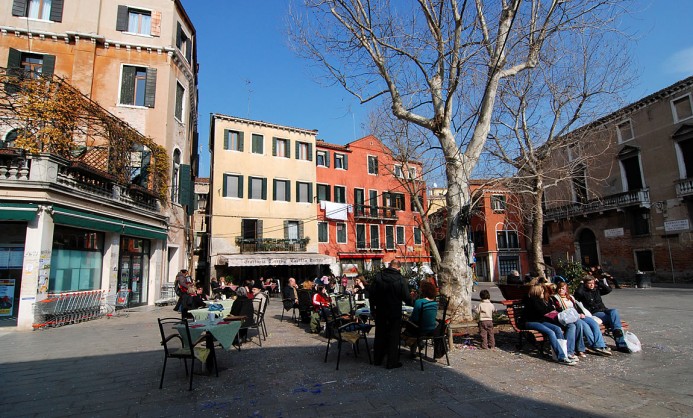 If you have more than 3 days to spend in Venice, here is what we suggest to do in the fourth day.
LISTA DI SPAGNA: starting from the station go along Lista di Spagna, where there are several shops and drugstores. Not far from there you can find Campo St.Geremia with Palazzo Labia, built between 1600 and 1700 at the expense of the Labia family and today siege of RAI, and the Church of St. Geremia. Go on and cross the Guglie Bridge from where you can see Rio Terà St. Leonardo, where the fruit market takes place, and the Strada Nuova. Once you have descended the bridge turn left and after 50 metres go on under the arcade of the old Ghetto.

GHETTO: now you are in the area of the old ghetto. Ghetto, which derives from Getto ‘jet’, as in such area in ancient times there was a foundry for cannons, is a word born in Venice and all the ghettos in the world have inherited their name from the small insula completely surrounded by a ring of water where just the Jews lived. Then you will find, first on your left and then on your right, the largest and most recent Synagogues (Spanish and Levantine). In order to go into them and into the others, which are half hidden from the view, you will have to go on as far as the Campo of the Ghetto Novo and the Museum of Jewish Art, where every hour some guided visits to the Synagogues start (about an hour and a half). Once the visit is terminated,go towards the quiet Fondamenta of the Ormesani and go throughout it in order to reach the Fondamenta of Mercy where you will turn left towards Calle Larga and go straight on as far as the Fondamenta of the Madonna dell’Orto.

CHURCH OF THE MADDONNA DELL’ORTO: this can be rightly defined as ‘the church of Tintoretto’: in fact the great artist spent his life in the neighbourhood; he is buried here and his canvas transfigure the interior by means of their pathos (visit 30 minutes). The Church was erected in the Fourteenth century but it was restored during the Fifteenth century and just for this reason on its brick front, which is divided into three parts, there are element of passage from the Romanesque to the Gothic and from the Gothic to the Renaissance.

Going back to the Strada Nuova you will see other two famous Schools but they cannot be visited: the old and the new one of Mercy.

STRADA NUOVA AND CAMPO SANTI APOSTOLI: the Strada Nuova is plenty of workshops and shops, but try to enter one of the many narrow calli on your right; nearly all of them, facing the Canal Grande, let you enjoy and enchanting and unusual view of the buildings along the Canal. Entering the calle indicating the water-bus stop you will have the opportunity of admiring the magnificent front of the Ca’ D’Oro, in order to visit its interior. There, in fact, there is the Franchetti Gallery (visit one hour). At the end of the Strada Nuova, you will find Campo Santi Apostoli, namely an important linking junction with Rialto.

THE CHURCH OF MIRACLES: passing behind the Church of Santi Apostoli, and going on through calli and campielli you will reach Campo St. Canciano an then Campo S.Maria Nova, from where, beyond the narrow canal, you cannot help noticing the wonderful polychrome marbles which cover the sides and the front of the Church of Miracles. Once you have entered (visit 20 minutes) look at the splendid barrel vault with wooden coffer.

ST MARCO SCHOOL AND CHURCH OF SAINTS GIOVANNI AND PAOLO: being back to Campo S.Maria Nova, go on to the Calle Larga G.Gallina and after the bridge you will see theScuola Grande of St.Marco on your leftand in front of you the Church of Saints Giovanni and Paolo. This Church, which competes with the Church of the Frari for its greatness, stateliness and because inside it keeps, like the other church, a great amount of precious works of art, is an example of Gothic architecture. It is a brickwork too and has got a marvellous façade. Once you have entered (visit 45 minutes) by the portal of the Fourteenth century, that was built with columns carried by Torcello, you will be striken by the majesty and the height of the naves. In the Scuola Grande of St. Marco, one of the most ancient in Venice and founded in 1261, today there is the Civil Hospital of Venice.

PICTURE GALLERY QUERINI STAMPALIA: after crossing Campo St. Marina turn left towards Calle Pindemonte. Going straight ahead you will reach Campo St. Maria Formosa where, behind the Church, Palazzo Querini appears, namely a building where the old and the modern (inside it has been restored in an extremely modern and original shape by Carlo Scarpa) perfectly blend together. Today you can find: on the second floor a remarkable collection of paintings of the Veneto, Italian and foreign schools which were commissioned and bought by the Family from 1500 to the end of 1800, and on the third floor the Foundation Querini Stampalia which organizes many Contemporary Art exhibitions (visit of both floors at least an hour and a half). From here it is extremely easy, once you have walked along the Salizada San Rio, to reach Campo St. Bartolomio and Rialto.

(itinerary from http://www.venezia.net by Tania Danieli ) 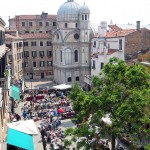 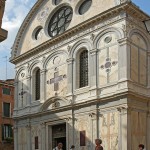 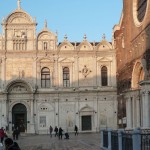 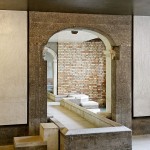 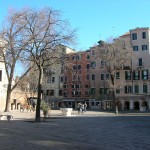 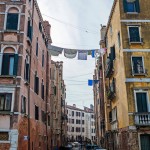 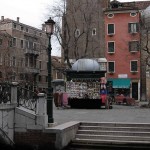 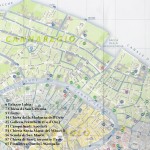