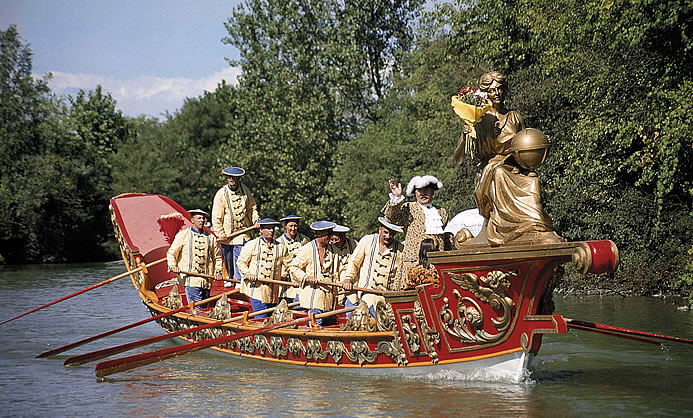 La Riviera Fiorita is the reenactment held every year on the second Sunday of September in memory of the meeting in 1574 between Henry III King of France and the Venice Doge Alvise I Mocenigo.
Riviera FioritaIn Riviera del Brenta celebrates the past of this territory with different events
Among the most beautiful events organized with the patronage of the province of Venice and the Tourism Promotion Authority there is the “Riviera Fiorita”.

It is a historical water parade founded in 1977 by a group of enthusiasts to the history and tradition of the Riviera del Brenta.

The parade recalls the meeting between Henry III in 1574 (future King of France) and the Doge Alvise I Mocenigo, son of Catherine de ‘ Medici, who, returning from Poland and headed to Paris to take the Crown of France, went to Venice in order to obtain a loan of 100 thousand ecues.
Henry III arrives in Venice from Padua, passing just to the Brenta Riviera and was able to enjoy the hospitality of the nobility of Venice. In fact along the waterway people in feast, musicians and especially the nobles greeted his passage.

He was welcomed in Mira in Villa Contarinii for a lunch and by the Foscari Family, in Malcontenta, for dinner. Today, as then, the second Sunday of September, a parade of boats laden with historical figures and rowers marches along the Brenta waterway between a large cheering audience in remembrance of that occasion.
The calm waters of the Brenta waterway, the Venetian Villas, lush gardens are the frame to hundreds of boats, bissons and caorlins parades to party with over 1100 historical figures, paddlers, musicians in period costume.
The parade starts at the Regal Villa Pisani in Strà at 10.00 am, and achieves Aims at about 13.00 o’clock, where, at Villa Contarini (today also known as Palace of the Lions), takes place the traditional lunch .
In the afternoon the procession of boats carries on crossing Oriago and Malcontenta , to head towards Venice-