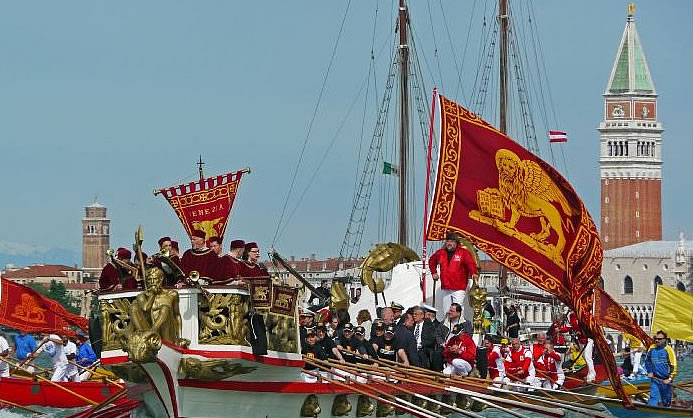 Every year Venice attracts millions of visitors to events that are famous the world over. The Festa della Sensa, is one of the city’s best known festivals that bring to life its thousand year history and its close ties to the sea and the art of “Voga alla Veneta” rowing.
The Sensa (Ascension Day) Festival was celebrated by the Venetian Republic on the day of Christ’s Ascension. Sensa is the Venetian dialect word for ascension. It commemorates two important events in the life of the Republic: one on 9 May in the year 1000, when Doge Pietro Orseolo II came to the rescue of the inhabitants of Dalmatia, who were under the Slav menace. The second event took place in 1177, when, in the reign of Doge Sebastiano Ziani, Pope Alexander III and Emperor Frederick Barbarossa signed the peace treaty in Venice that put an end to the century-long diatribe between the Papacy and the Empire. The rite of the Wedding with the Sea used to take place on the occasion of the Ascension Day Festival. Every year on that day the Doge on his state barge, the Bucintoro, sailed to Sant’Elena, at the level of San Pietro di Castello Church. The Bishop waited to bless him on a boat with gilt sides. To emphasise the Serenissima Republic’s dominion over the sea, the Festival culminated with a kind of propitiatory rite: the Doge sailed to the channel between the lagoon and the sea and threw a gold ring into the water.

La Sensa today.
Thanks to the Comitato Festa della Sensa, Venice began to celebrate Ascension Day again in 1965, with a water parade of traditional rowing boats from San Marco to Lido, organized by Coordinamento delle Società Remiere di Voga alla Veneta, leaded by the “Serenissima” boat, where the mayor and the other authorities take place and where the Wedding with the Sea is celebrated again: the evocative ceremony includes the throwing of a symbolic ring in the water and a High Mass in the church of San Nicolò.
The programme is completed by the Sensa Market at the Church of San Nicolò on Lido, by the Venetian style rowing races and by many other events.
Furthermore, the event goes far beyond mere re-evocation: the Gemellaggio Adriatico (“Adriatic twinning”) project now links the Serenissima Republic with a city or a geographic area that has had a special historical relationship with Venice, joined in a bond of culture, love of the sea and the activities connected with the sea. In 2012 the ring that is its symbol passed from the Cities Forno di Zoldo and Zoldo Alto (BL) to the city of Asiago (VI).
In addition to this, the Festival is the occasion for the award of the “Premio Osella d’Oro della Sensa”, which is given to public bodies, institutions and private citizens that have given lustre to the city by means of their activities in the spheres of culture, crafts and trade.

The Sensa today is a great time for meeting and fully realising the value of Venetian history and traditions: it is the festival of the city itself and its relationship with the sea.