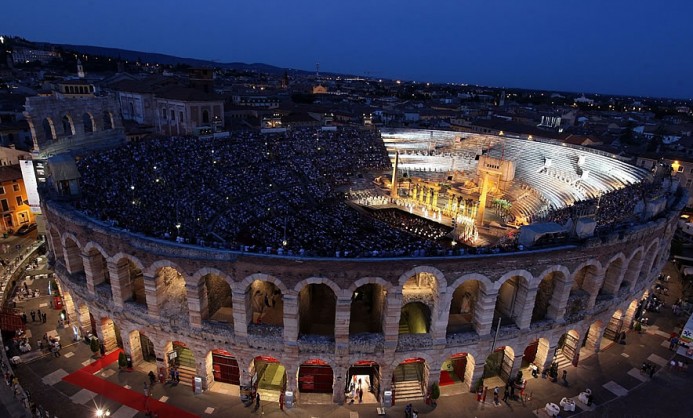 This is a classic itinerary of the historic centre of Verona, it proposes the main stop overs. It is great for all those visiting Verona for the first time and want to have a general overview of the city. This itinerary gives a first impression of the city and its merits.

The Arena, the Roman amphitheatre, is the most representative monument known in Verona.
It was built at the end of the first century after Christ to accommodate gladiator fights so much in vogue in ancient Rome, it stood impressive from the large space remained outside the walls that were closing the loop of the Adige river to the South. Its dimensions show us the development and importance that Verona should have had in the decades of the Imperial era. The Arena, with a capacity of approximately 20,000 spectators is indeed the third largest Roman Amphitheater after the Colosseum in Rome and the Arena of Capua.

The amphitheatre of Verona however is so well preserved to be still used for concerts, music, but above all for the opera season attended by visitors from all over the world. Due to its construction characteristics, the acoustics of the Arena is such that during the operatic concerts there is no amplification neither for the music nor for the voice. From the Arena take the famous Via Mazzini , the shopping street, until Via Cappello.

From Via Cappello, after 50 meters turn right at Juliet’s House, probably one of the most visited places in the city. The building, dating from the 13th century, was long owned by the Cappello family, whose emblem is carved on the arch into the courtyard. The Cappello identification with the Capulets gave rise to the belief that there was Juliet’s house, the heroine of Shakespeare’s tragedy. The medieval residence picturesquely restored by Antonio Avena to the mid 30 ‘s, has been used in the recent past for temporary exhibitions. The building has an inner façade in brick, a Gothic portal, trefoil windows, a balustrade connecting the various bodies from the outside of the house and, of course, the famous balcony.

Inside are exposed furnishings of the 16th-17th century, frescoes related to the story of Romeo and Juliet and Renaissance ceramics of Verona. The rooms on the top floor are covered by a wooden ceiling trefoil, with coffered painted ceiling in blue and gold stars.

In the courtyard stands the bronze statue of Juliet, by the sculptor Nereo Costantini.

Back on Via Cappello go back the 50 metres you just walked and arrive at the Piazza del Erbe, the ancient centre of Verona.
At Piazza del Erbe you will find the Torre dei Lamberti (VeronaCard is valid) from where you can enjoy a magnificent view over the city.
Depending on your time and mood, take this perfect opportunity to make a short detour to the Piazza dei Signori and to the tombs of the Scala family which are right behind the Piazza.

Back on the Piazza del Erbe, leave the square and walk down the Corso Porta Borsari to the ancient city gate of Porta Borsari.
Further down the Corso Cavour you will finally reach the castle of the Scala family, the Castelvecchio (VeronaCard is valid) and the connected famous Ponte Scaligero.

The Via Roma leads back to the Piazza Brà where you can enjoy a short break in one of the numerous restaurants.